STING (Stimulator of Interferon Genes) has become a promising drug target for medicinal chemists. Agonists of the cellular double-stranded DNA sensor STING [1] have boosted the immuno-oncology field of research and raised hope for patients as powerful agents for combined therapies, by further harnessing the antitumor potential of the immune system. Evidence from recent studies has identified the host STING pathway as a critical mechanism of innate immune-sensing of cancer, driving the production of type-I IFNs and promoting aggressive antitumor responses [2–9]. Small molecules capable of triggering STING-dependent cellular processes are effective at facilitating immune response to cancer cells and blocking virus replication.

Among natural ligands, cyclic dinucleotides (CDNs) are especially potent activators of STING that are ubiquitous second messengers in prokaryotes [10] and within the immune system of eukaryotic species [11]. These CDNs are produced either through the cGAS pathway or are directly found in the cytosol due to the presence of pathogens [12].

The STING Targeted Library has been created by docking-based virtual screening using X-ray data for dimer form of STING in complex with cyclic di-GMP (PDB ID: 4F9G). The formation of at least 1 H-bond with Thr263 has been used as an obligatory docking constraint during screening (Fig. 1).

The selected 1,600 drug-like screening compounds of potential STING agonists and antagonists that comprise the Library are Ro5-compliant and do not contain reactive and toxic groups. The docking score value is available for each compound in the compound structure file provided on requests. 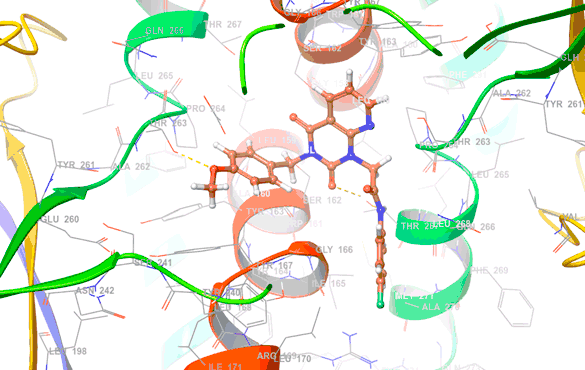