The key aspect of any successful screening is the design of a compound library. It should cover a broad spectrum of molecular processes and drug targets and, hence, can be a suitable starting point for a drug screening project. Normally, a predominant strategy for the assembly of a library for phenotypic screening is to select the most chemically diverse compound set, proceeding from specific characteristics, such as molecular scaffolds or chemical descriptors. Strategies that directly integrate known biology of compounds into the screening set have brought phenotypic screening to the next level. By maximizing the known biodiversity instead of (or together with) the chemical diversity of screening collections these methods have been made possible by a vast amount of data on small molecules bioactivity that has become available over the past decade.

Possessing one of the largest drug-like compound collections on the market, our Company has designed two curated Phenotypic Libraries to facilitate cell-based phenotypic drug discovery screens:

The Libraries are characterized by high chemical/biological diversity and optimal physicochemical properties. Compound cherry-picking is available. Custom compound selection based on specific parameters can be performed on request.

You may also be interested in our Pre-plated Diversity Sets and Biologically Active Compound Library.

Please, contact us at orders@lifechemicals.com for any details and quotations.

The rationale behind the ChemDiversity Phenotypic Library was the assumption that chemical diversity ultimately implies biological diversity and that a chemically diverse screening library should cover a broad spectrum of targets and molecular processes. The point is arguable, given the widely accepted belief in medicinal chemistry that not all parts of the chemical space are biologically active.

Taking this argumentation into account, only most carefully selected, diverse, lead-like and drug-like molecules covering the broadest chemical space have been picked out from the source library (Life Chemicals HTS Compound Collection) to design our cutting-edge ChemDiversity Phenotypic Library. Hence, the Library can be considered as a remarkable collection enriched significantly with biologically relevant molecules having optimal physicochemical parameters for drug discovery.

Illustrated in Fig. 1 is preparing the ChemDiversity Phenotypic Library (over 7,500 compounds) obtained as a result of consecutive narrowing down the initial 500,000 compounds. In addition to selection by structural diversity, these steps included retaining only compounds with favorable properties, i.e. those passing through PAINS, Ro5, Veber, reactive/toxic group, and other filters. Special attention has been paid to removing compounds with potentially low water solubility and cell permeability.

The BioDiversity Phenotypic Library (almost 11,000 compounds in total), besides applying the structural dissimilarity rules wherever possible, has a different underlying principle, prioritizing maximum diverse bioactivity of the compounds. It includes more than 4,100 compounds with experimental biological activity (including a number of approved and experimental drugs) extracted from ChEMBL and DrugBank databases. Furthermore, the Library has been enriched with 3,500 analogs of the above mentioned bioactive compounds by applying a 2D fingerprint similarity search (Tanimoto ≥ 0.85). Also, 3,400 natural product-related compounds (including about 1,500 natural-like fragments) have been added to fill the Library with more biologically relevant molecules.

Detailed description of the Library design is schematically shown in Fig. 2. It does not contain reactive, toxic and PAINS compounds, as well as compounds with low water solubility (LogSw) and Caco/MDCK cell permeability (calculated data). The bioactivity spectrum of the Library is presented in Fig. 3.

The Library contains links to the compounds’ bioactivity profiles in the ChEMBL database. Various compound annotations (such as UniProt IDs of all targets associated with each compound) are available as well. 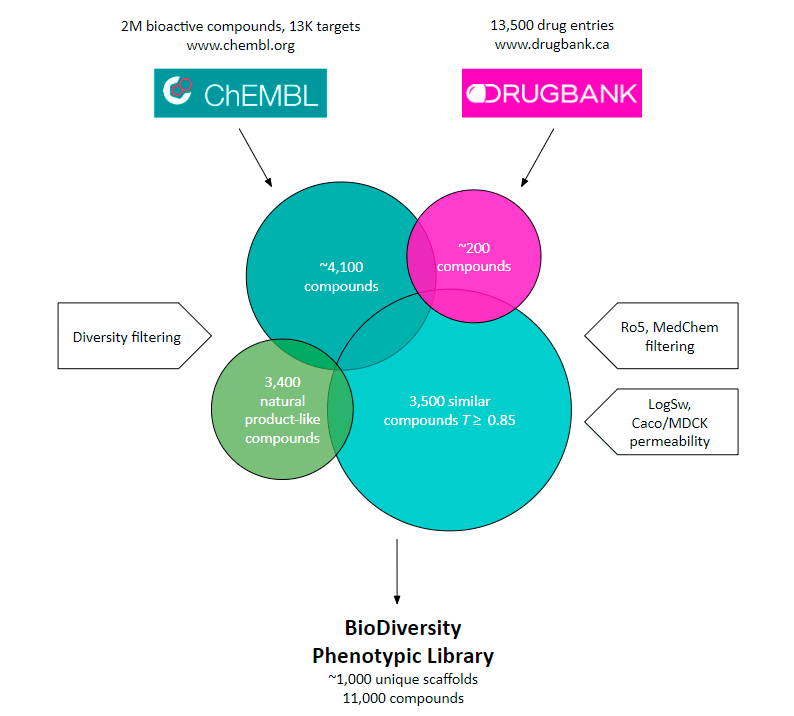 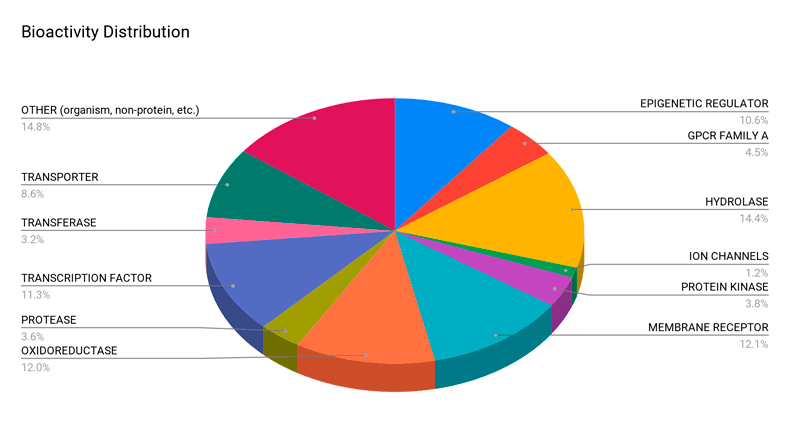