The discovery and development of new drugs is a lengthy and complicated process, which demands significant time, energy, and resources. The drug candidates have a high attrition rate as they often fail to show the anticipated efficacy, or are found to pose unacceptable risks to human health. This is why studying ADME/Tox (Absorption, Distribution, Metabolism, Elimination, Toxicity) is crucial in drug discovery and development. By addressing these key questions, these studies allow drug candidates to be assessed for their viability (Fig. 1): 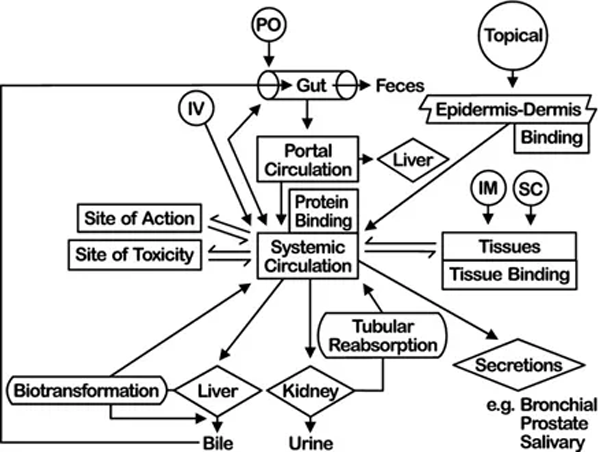 Fig. 1. Basic schema by which drug is absorbed, distributed, metabolized, and excreted from the body. These processes are relevant to a drug administered by the intravenous (IV), intramuscular (IM), subcutaneous (SC), oral (PO), or topical (TOP) routes. Source: https://veteriankey.com/absorption-distribution-metabolism-and-elimination/

Currently, it is estimated that only ten compounds out of a thousand screened hits will enter preclinical testing in the drug discovery and development pipeline, and a mere 9.6% will progress to clinical trials [1, 2]. Additionally, the drug approval process is estimated to last on the average 15 years, with major expenses referring to phases II and III of clinical trials [3-6], where pre-approval costs for a drug can reach up to $2.56 billion, rising to $2.87 billion at post-approval stage [6-8].

In the drug R&D pipeline, a variety of in vitro tests is carried out throughout the process from the initial small molecule to the optimized lead to ensure their efficacy and safety, and also to identify structure-activity relationships (SARs) that can be associated with specific physicochemical properties and assist the lead optimization process [8-10].

Nearly half of all drug candidates fail because of insufficient efficacy [11], and up to 40 % of drug candidates must be discarded because of their toxicity [12]. To illustrate this, there appeared drug-drug interactions or toxicity associated with drugs, such as mibefradil, soruvidine, and phenylpropanolamine hydrochloride [13].

Both regulators and drugmakers have come to realize that ADME/Tox studies play a vital role in evaluating the pharmacological properties of a drug candidate that can finally make it a success. Acknowledging the importance of ADME/Tox studies, drug discoverers have already started to undertake them at the very early stages of the whole process. Pharmaceutical companies began setting up early ADMET assessments routinely in the late 1990s when these studies were recognized for their value. They were astonished by the results. Reasons for failure related to ADME and drug metabolism pharmacokinetics decreased from 40 % to 11 % [14].

At present, major obstacles in drug development are efficacy and human toxicity [15].

The destination of the drug at each step of its journey through the body is determined by several parameters. In this regard, every parameter will be addressed directly and individually. Due to the complexity of the human body, all those different parameters influence each other, it is not possible to address experimentally each of these potential parameters separately. Furthermore, this applies to interpersonal variations brought about by gender, age, genetic state, disease, etc., in addition to internal mechanisms which are distributed among compartments in the body. In order to get an approximation, most of the important variables are indirectly assessed through models or surrogates (Table 1). For the purpose of characterizing chemical properties, facilitating calculations, and standardizing experiments, compounds' characteristics are encoded through descriptors, which are numerical representations of the chemical information of a molecule. These descriptors and properties (such as molecular weight or H-donors and H-acceptors) can be directly determined in experiments or generated via computation.

Thus, ADME properties enable drug developers to evaluate a drug candidate for safety and efficacy, which is crucial for regulatory approval. A drug developer can use them to decide if a drug candidate should be selected for preclinical and clinical development. ADME studies in the early stages could provide insights into small molecule changes occurring in animals and human cells during disease and as a response to drug therapy.

At Life Chemicals, we provide an array of In Vitro ADMET Tests as a part of our early drug discovery portfolio aimed to support companies and academic institutions working in the field of pharmaceutical and biotech research in their innovative drug development projects. In particular, we offer the following ADMET-related services:

Please, contact us at orders@lifechemicals.com for any additional information and price quotations.