In 1942 the British biologist Conrad Waddington introduced the term “epigenetics” to describe the mechanisms by which an organism stably adapts its phenotype to the environment. Over the years, this definition evolved into the classical one which determines “epigenetics” as a phenotypic variation that does not originate from an underlying change in the organism’s genotype.

Epigenetics is essentially required for the normal development of a living organism and its ability to respond to environmental signals. However, it can suffer from the dysregulation and could lead to scenarios where it becomes a significant contributor to the appearance and development of human diseases [1].

Molecular machinery behind epigenetics employs enzymes that are referred to as ‘writers’, ‘readers’, and ‘erasers’ (Fig. 1). They catalyze a highly complex and dynamically reversible set of chemical alterations within the nucleosomal histone proteins and nucleic acids [2].

It has been proven that all three families of epigenetic proteins mentioned above are important drug targets whose activity can be modulated with small-molecule inhibitors.

The first wave of epigenetic drugs was characterized  by  the development of early DNA methyltransferase and Histone deacetylase inhibitors. This resulted in approval of Vorinostat and Romidepsin, the  pioneer drugs that affect epigenetic post-translational modification of histone proteins. Also, in 2004 Azacitidine (Vidaza) was approved by the FDA for all five stages of myelodysplastic syndrome (MDS). Together with Decitabine (Dacogen, approved in 2006) Vidaza is currently the first-line therapy for MDS when stem cell therapy is not suitable. It is used to treat chronic myelomonocytic leukaemia (CMML) and acute myeloid leukaemia (AML), as well. It should be noted that these first four epigenetic drugs were all identified through phenotypic assays, and the timeline from discovery to approval was very long (Fig. 2) [3]. In addition, it is worth mentioning that the discovery of three of these compounds has been made by Academic institutions. 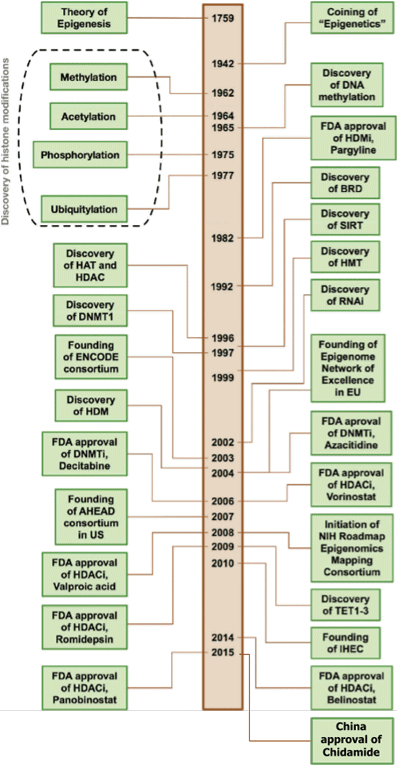 The next wave involved analogue-oriented drug discovery which led to the second generation of DNMT and HDAC inhibitors. Taking advantage of the known leads for DNMT and HDAC, drug discovery projects in biotech and big pharma companies have culminated in more than 20 clinical candidates.  As yet, three approvals for HDAC inhibitors - Belinostat, Panobinostat, and Chidamide have been obtained.

This success has evidenced  that it is possible to regulate an epigenetic process for the treatment of disease. To continue, researchers are now trying  to extend these small-molecule discoveries to other epigenetic “writer” and “eraser” targets (and even epigenetic “readers”).

The efforts described  brought about  the third wave of epigenetic drug discovery that has witnessed rapid progress with three new targets: the KMTs, KDMs, and bromodomains. The story of these achievements was astounding, given that the bromodomain was identified as an acetyl-lysine binding unit only in 1999, while EZH2 was recognized as the H3K27 methylase in 2002, and LSD1 as the  KDM as late as in 2004. In just over a decade, multiple small-molecules for these targets have advanced to clinical trials and it is very likely that one or more of these will receive clinical approval in the near future.

Epigenetics is an exciting research field of vast clinical implications, with this conclusion having been confirmed with dynamic advances in epigenetic drug discovery and, hence, growing insights in the importance of epigenetic mutations in diseases. At some point, all these factors may  give rise to  another (fourth) wave of epigenetic discovery efforts. However, to make it happen, various challenges are to be met to pave the road to clinical use of epigenetic drugs,   including such aspects as target selection, chemistry-associated concerns, in vivo biology, to name but a few.

At Life Chemicals, we have recently updated and re-designed our Epigenetic Targeted and Focused Libraries with an emphasis on a number of highly promising ligands and targets in response to most recent epigenetic drug discovery trends, including, in particular:

For details on our products and price quotations, please, contact us at orders@lifechemicals.com.

Visit our Website to get more information and download SD files with compound structures in the Downloads section.