Serine proteases are one of the most biologically important families of proteins that have been shown to play multifarious roles in various diseases (such as cancer proliferation, auto-immune disorders and allergy) [1]. Their main function in humans is coordinating digestion, however, serine proteases are also involved in other processes such as inflammation, blood clotting and the immune system performance in both prokaryotes and eukaryotes [2,3].

Serine proteases have a distinctive structure, consisting of two beta-barrel domains that converge at the catalytic active site, and can be further categorized based on their substrate specificity as trypsin-like (positively charged residues Lys/Arg), elastase-like (small hydrophobic residues Ala, Val, Gly) or chymotrypsin-like (large hydrophobic residues Phe/Tyr/Trp). The enzymes are characterized by a catalytic triad of residues (Ser195, His57, and Asp102, chymotrypsin numbering system) that is responsible for amide bond hydrolysis [4].

To design this library, a 2D fingerprint similarity search method was used. A reference database of 26,000 biologically active compounds from assays related to serine proteases was collected using the data available from patents and literature publications. Life Chemicals Stock HTS Compound Collection was searched for compounds similar to the compounds from the reference database using MDL public keys and Tanimoto similarity cut-off of 85 %.

The list of targets used for the Library preparation and a number of their potential inhibitors is represented below: 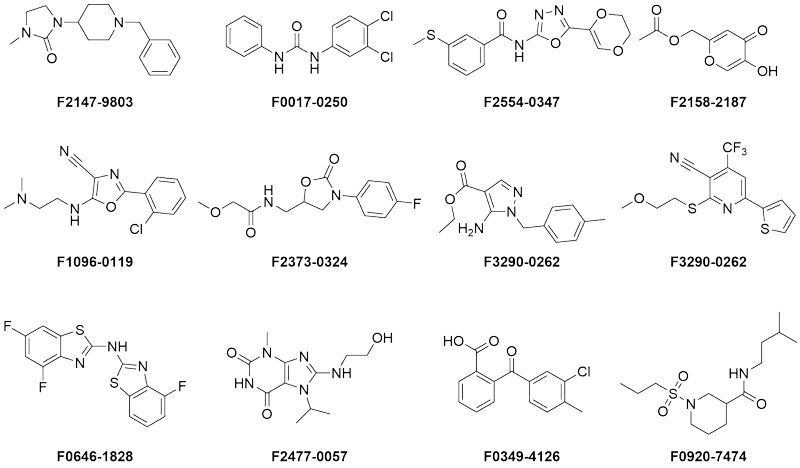 Virtual screening workflow has been set up using Schrödinger software, while the bound ligand has been extracted from the reference crystal structure. Molecules from a reference set of   different selective serine protease inhibitors and the Life Chemicals HTS Compound Collection were passed through in-house structural filters and then docked in the enzyme active site.

The screening resulted in around 2,000 compounds which were further narrowed down to almost 1,000 based on manual evaluation of the receptor-ligand complexes and compound diversity.