Phosphodiesterases (PDE) are a family of enzymes that degrade the phosphodiester bond in the second messenger molecules, cAMP and cGMP, to terminate signal transduction. PDE10, a dual cAMP/cGMP phosphodiesterase, is expressed at high levels in the striatal medium spiny neurons. Still, elsewhere in the brain and other tissues, it is expressed at very low levels. Therefore, it is an attractive drug target for drug discovery efforts to search for effective and selective treatment of degenerative CNS disorders. Inhibitors of phosphodiesterase PDE10 may potentially cure psychiatric and neurological diseases, including schizophrenia, delusional disorder, anxiety disorders, Alzheimer’s disease, movement disorders such as Parkinson’s and Huntington’s diseases [1]. Cognitive dysfunction is responsible for substantial disability in most of these diseases and is not improved significantly by current medications.

At the first stage, all available X-ray structures of PDE10 complexed with a small molecule phosphodiesterase inhibitor (except fragments) were obtained from Protein Data Bank. Then, after diversity analysis and discarding the most similar structures, 42 3D pharmacophore models were generated (Fig. 1) and screened against the Life Chemicals HTS Compound Collection. In addition to ligand features, the models included PDE10A active site boundaries. 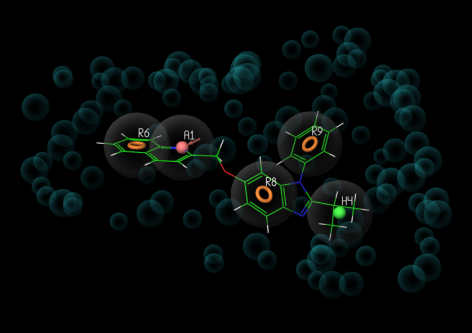 Figure 1. An example of the pharmacophore model generated on the basis of the complex of PDE10A and 2-({[1-phenyl-2-(propan-2-yl)-1H-benzimidazol-6-yl]oxy}methyl)quinoline (PDB ID: 3WI2)

As a result of applying 12 pharmacophore hypotheses, around 10,000 virtual screening hit compounds were revealed and passed to the second stage - molecular docking. The docking (Glide, Schrödinger) was performed on the basis of 3 conformationally different PDE10A structures. After the docking and manual inspection of the complexes, 1,450 best-scored and structurally-diverse potential phosphodiesterase PDE10 inhibitors were included in the PDE10-focused Screening Compound Library (Fig. 2). The library is Ro5-compliant and does not contain PAINS, toxic and reactive compounds.

Please, contact us at orders@lifechemicals.com for details and quotations.

Figure 2. Examples of the virtual hit molecules obtained after docking.