Ligases are enzymes that are capable of catalyzing the reaction of joining two large molecules by establishing a new chemical bond, generally with concomitant hydrolysis of a small chemical group on one of bulky molecules, or simply linking two compounds together [1]. They are classified under EC 6 primary class of enzymes and further divided into six subclasses known as ligases establishing carbon-oxygen bonds, carbon-sulfur bonds, carbon-nitrogen bonds, carbon-carbon bonds, phosphoric–ester bonds, and nitrogen–metal bonds [2].

These proteins are involved in various cellular pathways, including but not limited to protein trafficking, subcellular localization, innate immune response, viral infections, DNA damage responses and apoptosis [3]. But more often the ligase-system plays an important role in tumorigenesis and cancer development [4].

Life Chemicals has designed a Library of over 3,900 drug-like screening compounds that are small-molecule analogs of known ligase inhibitors with experimentally determined activity. Thus, The Library parameters make it an excellent source of new structures for drug discovery projects.

First, the reference set of 23,174 compounds with known ligase blocking activity was obtained from the CHEMBL database. The compounds have been filtered to keep only those possessing moderate and high activity against ligase targets, with further filtering narrowing down a set to 12,000 activity entries on 10,000 unique ligase modulators. A 2D fingerprint similarity search of the reference set has been done against the Life Chemicals HTS Compound Collection (Tanimoto > 0.85, max 50 analogs for a reference compound). In addition, molecules containing highly reactive groups have been removed from the final Library.

The search was performed against the following ligase enzyme targets (Fig. 1): 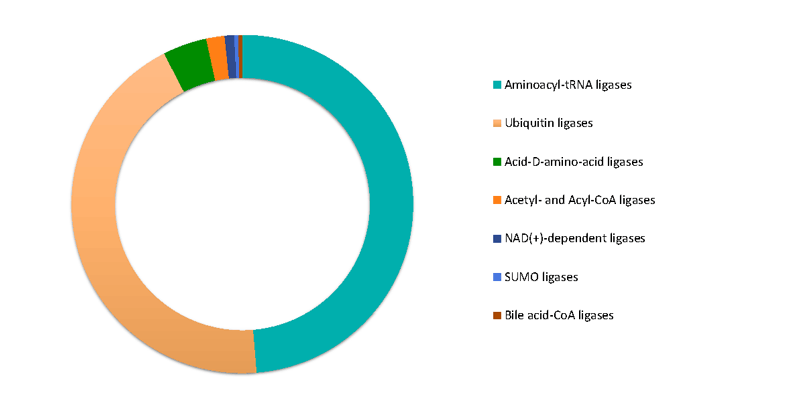