Protein kinases belong to a complex group of enzymes that arose in the early stages of evolution and, along with protein phosphatases, are involved in phosphorylation and dephosphorylation of proteins. Separate groups of proteins: serine/threonine specific-, Mg2+/Mn2+dependent-, tyrosine and dual specific kinases are unique in structure and functions and typical for representatives of individual kingdoms [1].

Numerous studies have shown that tyrosine kinases (TKs) are important mediators of signaling cascades, determining key scenarios in diverse biological processes, such as growth, differentiation, metabolism, and apoptosis in response to external and internal stimuli [2]. Tyrosine kinases are attractive biological targets for cancer therapy, as their abnormal signaling has often been linked with tumor development and growth. They are a group of around 90 enzymes capable of phosphorylating the amino acid tyrosine on another protein that leads to conformational changes and, typically, to activation of that protein (Fig. 1) [3].

Initially, about 150,000 reference compounds with known TKs blocking activity were obtained from ChEMBL, CHEBI, and DrugBank databases. The compounds have been filtered to retain only those possessing moderate and high activity against TKs that has narrowed down the reference set to 48,064 compounds. At the next step, a similarity search of the Life Chemicals HTS Compound Collection has been done against the reference set employing 2D molecular fingerprints with similarity metrics (Tanimoto > 0.85). Compounds obtained by this search were filtered by the Lipinski's Rule of Five to include only drug-like ones. In addition, PAINS compounds, as well as those with "bad" and reactive groups, have been removed from the Library (Ro5 compliance is indicated).

The selected potential tyrosine kinase inhibitors are predicted to possess activity against the following targets: 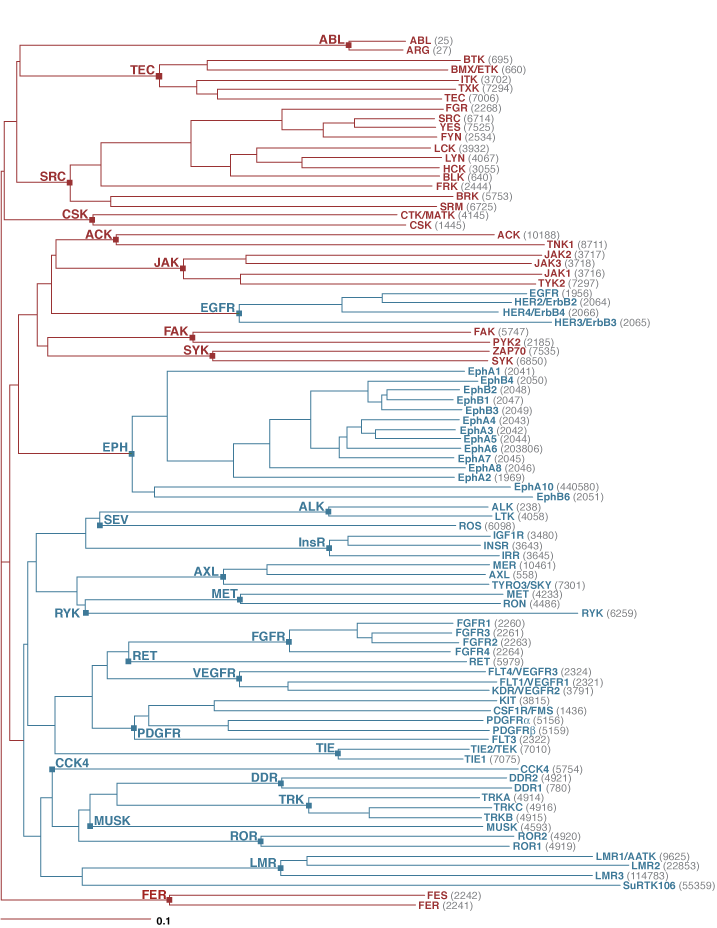