Inhibition of activity of functional proteins is the primary strategy used in the traditional development of small-molecule drugs. In contrast, targeted protein degradation is an alternative and growingly employed approach in drug discovery that aims at reducing overall levels of disease-relevant proteins [1]. While traditional small-molecule or antibody drugs may only allow access to ~20 % of the proteome, degradation techniques can open the door to the remaining 80 % [2].

Synthetic targeted protein degrader molecules (often referred to as proteolysis targeting chimeras (PROTACs) [3] are intended to alter the ubiquitin-proteasome machinery to change the scenario of disease-causing proteins. These small bifunctional molecules bind both to the target and the ligase, causing their spatial proximity. This ultimately leads to the ubiquitination of the target and its degradation by inducing selective intracellular proteolysis.

PROTACs are designed with two active domains and a linker (Fig. 1):

The design of PROTACs is not so trivial and straightforward, since even slight alterations in any moiety can affect binding to the POI or E3 ligase or the formation of the ternary complex.

However, their molecular weight (usually 800 Da or more) poses a challenge for structural optimization [4]. In addition, the associated degradable space is limited to proteins that can efficiently be liganded with small molecules as PROTACs are required to bind both the target protein and the E3 ligase individually.

Life Chemicals offers PROTAC Building Blocks Library composed of compounds highly similar to those known to target E3 ligases, as well as of linker-like compounds (PEGs, Alkyl-Chain, and Alkyl/ether). The Library (over 1,700 compounds) has been designed based on the structure and activity data for known PROTACs and E3 ligase binders (2D fingerprints similarity search, Tanimoto index ≥ 0.85) and general structural properties of known PROTAC crosslinkers (Fig. 2).

The second active PROTAC moiety, functional against a specific drug target of interest, can be found in the Life Chemicals Collection of Targeted and Focused Libraries. 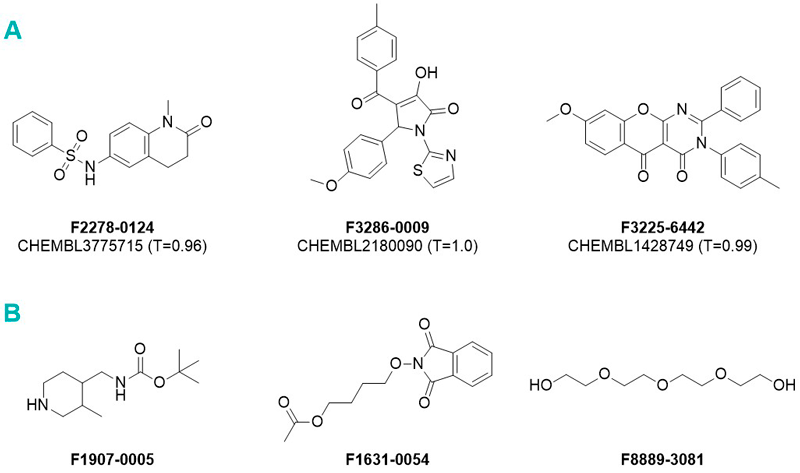