Every year about 210 million people are infected with malaria, and almost 450,000 people die from the disease; most of them are young children in Africa. Malaria is caused by Plasmodium parasites that are spread to people through the bites of infected female Anopheles mosquitoes, called "malaria vectors." Five parasite species cause malaria in humans, and two of these species – P. falciparum and P. vivax – pose the greatest threat. P. falciparum causes a more severe form of the disease, and those who contract this form of malaria have a higher risk of death.

Life Chemicals Antimalarial Screening Libraries are based on known structure/activity data for antimalarial compounds and comprises drug-like screening compounds with high structural similarity to those. The Libraries are offered for all kinds of anti-malarial research and HTS in drug discovery.

This Library has been designed based on a reference set of molecules with reported anti-malarial activity collected from the ChEMBL database. The set has been narrowed down to retain only compounds with high activity (IC50 and Ki ≥ 1uM, Inhibition ≥ 30%, etc.). 2D molecular fingerprints and Tanimoto index of ≥ 0.85 have been used for compound selection and resulted in 7,900 molecules predicted to be active against one or more of the following Plasmodium species:

The Malaria Box has been assembled by MMV (Medicines for Malaria Venture) to facilitate malaria and neglected disease drug discovery research (Fig. 1). It contained 400 structurally diverse compounds with an antimalarial activity that were available free of charge until December 2015. All of the compounds have confirmed activity against the blood-stage of P. falciparum and included: 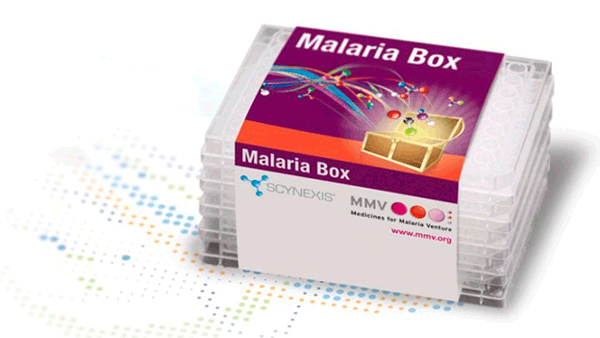 Life Chemicals is offering a collection of almost 2,600 small-molecule compounds similar to those from the Malaria Box (Tanimoto ≥ 0.80). They were selected by 2D fingerprint similarity and are intended to use in screening programs against malaria.