Over the past few years, immunotherapy has been associated with significant results in cancer treatment. By modulating the activity of T-cells, activating apoptosis of antigen-specific T-cells, and inhibiting regulatory T-cell activity, Programmed Cell Death Protein 1 (PD-1) inhibits immune responses and promotes self-tolerance. A transmembrane protein called Programmed Cell Death Ligand 1 (PD-L1), in association with PD-1, can inhibit cytokine secretion and suppress the proliferation of PD-1-positive cells. In various malignancies, PD-L1 can attenuate the host immune response against tumor cells. Proceeding from the above, it can be assumed that PD-1/PD-L1 contributes to cancer immune escape and greatly affects cancer treatment.

The compound selection can be customized based on your requirements, cherry picking is available.

Please, contact us at orders@lifechemicals.com for any additional information and price quotations.

To start with, all toxic, reactive, and pan-assay interference compounds (PAINS) were filtered out. Since many PPI inhibitors were shown to be non-compliant with the "Rule of Five (Ro5)" owing to their physicochemical criteria, upper thresholds for Ro5 were not limited.

Taking into account recent publications [1] and relevant X-ray data, we decided to conduct two separate virtual screens, since the binding site adopts two different conformations (open and closed) depending on the ligand bound (Fig. 1). Multiple conformations were used with the purpose to increase the accuracy of the docking, and thus, the hit rate.

According to [1], two PDB entries 5N2D and 5N2F have been taken and prepared for the virtual screening. Their receptor grids were constructed without assigning any constraints, such as H-bond and hydrophobic regions, in order to allow the software to explore as many positions and conformations in the PPI interface as possible. Rotatable groups in the residues that could make contacts with the docked ligands were allowed. 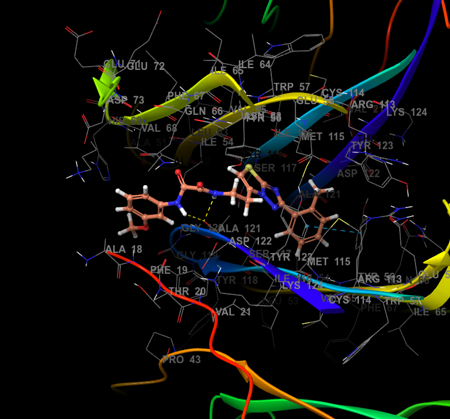 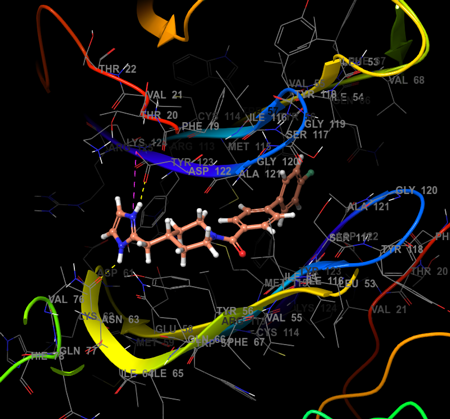 High-Throughput Virtual Screening (HTVS) and Standard Precision docking (SP) implemented in the Glide (Schrödinger) program were applied sequentially for each screen. After docking with both HTVS and SP, the compounds obtained were ranked by the docking score and presence of strong intermolecular interactions in order to select top virtual hits with potential PPI inhibitory activity (Fig. 2). As a result, over 2,000 best-scored screening molecules have been selected and included in this Screening Set to become a very attractive and potent tool for early-stage drug discovery.