There are four members of the p38 MAP kinase family. They differ in their tissue distribution, regulation of kinase activation and subsequent phosphorylation of downstream substrates. They also differ in terms of their sensitivities toward the p38 MAP kinase inhibitors. The best-studied isoform is p38 alpha whose activation has been observed in many haematopoietic and non-haematopoietic cell types upon treatment with appropriate stimuli.

The pyridinylimidazole compounds, exemplified by SB 203580 (Fig. 1), were originally prepared as inflammatory cytokine synthesis inhibitors that subsequently were found to be selective inhibitors of p38 MAP kinase. SB 203580 inhibits the catalytic activity of p38 MAP kinase by competitive binding in the ATP pocket. X-ray crystallographic studies of the target enzyme complexed with the inhibitor support observations made from site-directed mutagenesis studies, thereby providing a molecular basis for understanding the kinase selectivity of these inhibitors. 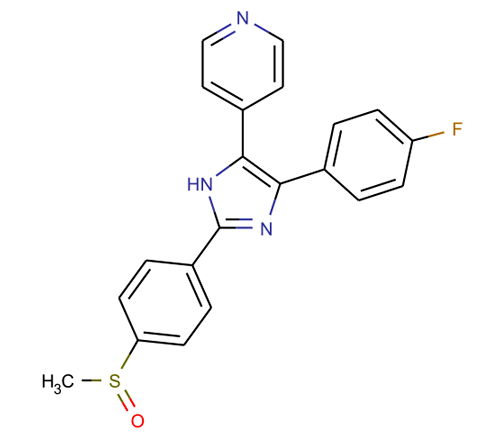 The Life Chemicals MAP Focused Library is aimed at type I inhibitors that could bind to ATP-binding site of the protein within DFG-in conformation of the activation loop. The structure of p38 MAPK recorded in 3BV2 PDB entry was used for docking studies. Molecular docking was performed and its results were analyzed within DOCK4.0-6.0 program. Molecular dynamics (MD) simulations and preparation of protein structures were carried out in GROMACS software. Ligand molecules were processed with GAMESS and GROMACS. Main features and constraints of the docking procedure were identified from following key residues from binding pocket of the protein: Met109, Glu110, Asp168, Glu71, Lys53 – donor/acceptor site; Thr106, Phe169, Leu74, Leu75, Val30, Leu171, Leu108 - responsible for hydrophobic interactions (Fig.2). 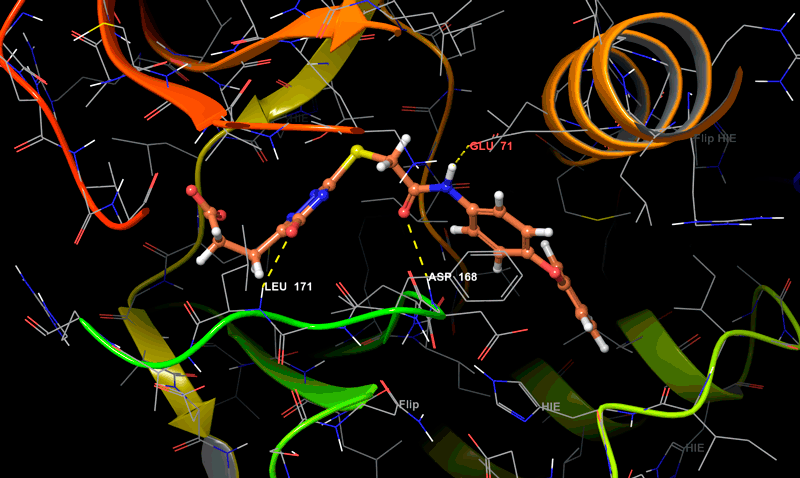