c-Met, also called MET or hepatocyte growth factor receptor (HGFR), is a receptor tyrosine kinase which is often deregulated in human cancers. C-Met kinase displays an aberrant activation in the malignant phenotype of various tumors, and thus, has drawn considerable attention as a drug target for cancer therapy. The number of c-Met inhibitors with a wide range of chemical structures are now under clinical investigation. An example of Cabozantinib that has been approved by the FDA in 2012 for treatment of medullary thyroid cancer proved feasibility of c-MET inhibition method in cancer therapy.

Life Chemicals has designed a screening compound library of potentially selective c-Met inhibitors based on comparison of the key amino acids in the protein binding site with the features of known potent inhibitors. The docking model of c-Met kinase binding site was built based on X-Ray structure of the protein recorded in 2RFS PDB entry [1]. A reference set of known inhibitors from ChEMBL database has been used for validation of the screening model. The key amino acids involved in ligand binding were identified by docking of known active compounds within Surflex-Dock tool (SYBYL-X). Thereafter, Unity Query Model of the protein binding site were prepared using SYBYL-X Unity module (screening tool). The Query Model includes the following features: acceptor and donor sites, hydrophobic regions and surface volume constraints of the protein (Fig.1).

The entire Life Chemicals Stock Compound Collection was processed with filters for detection and removal of Pan Assay Interference (PAINS) compounds. The screening procedure was applied to a pre-filtered set of Life Chemicals Stock compounds with Flexible Search option and feature constraint restrictions (at least 4).

The total number of compounds in the Library is about 1,100. 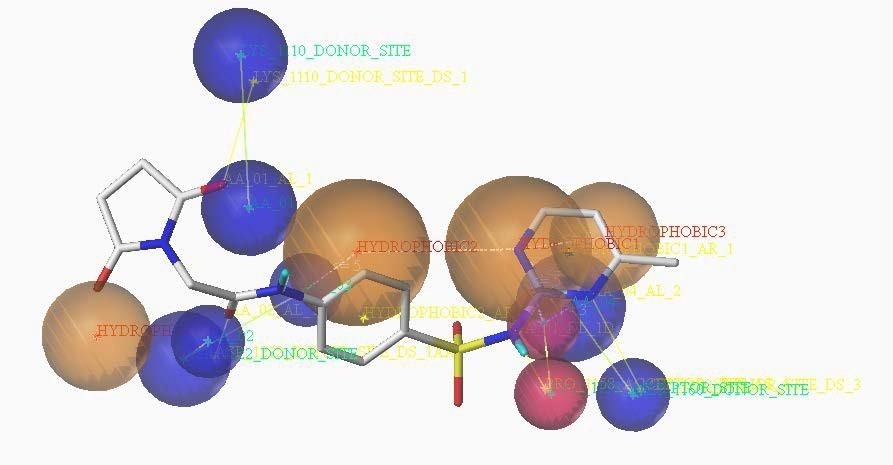