The crucial role of protein kinases in cell signaling, along with their demonstrated druggability and clinical importance, has brought these enzymes into focus as targets for therapy of a wide range of severe diseases, especially cancer. Ubiquitous enzymes known as protein kinase A (or PKA) regulate a huge number of processes, including growth, development, memory, metabolism, and gene expression. Dysregulation and mutation of PKA can have disastrous consequences, including  cancer. The reproducible recombinant expression, stability, and crystallizability of PKA make this kinase a valuable research tool, central to protein kinase research. In recent years, PKAs has also gained interest as a diagnostic biomarker due to association of its overexpression and secretion to blood plasma with several forms of cancer [1]. On the other hand, the ubiquitous and essential nature of cyclic adenosine monophosphate (cAMP) regulated cellular processes renders PKAs an ‘antitarget’ for most protein kinase inhibition strategies [2]. Thus, potent and selective inhibitors of protein kinase A are under investigation to get a better  understanding  of cAMP’s ability to  accomplish this task.

The X-Ray structure of Human Protein Kinase A with co-crystalized inhibitor (3MVJ PDB entry) [3] with resolution of 2.49Å was used for in silico screening of Life Chemicals  Stock  Compounds  Collection. The protein binding site model and docking procedure was validated with RMSD value of 1.5Å between crystallographic binding conformation and docked pose of the ligand. The key amino acid residues responsible for the ligand binding were identified and analyzed. Polar contacts with Val123, Thr183 and Glu121 were set as a main docking constraints. Finally, hit compounds were selected according to scoring functions (Fig.1).

The total number of compounds in the library is 730. 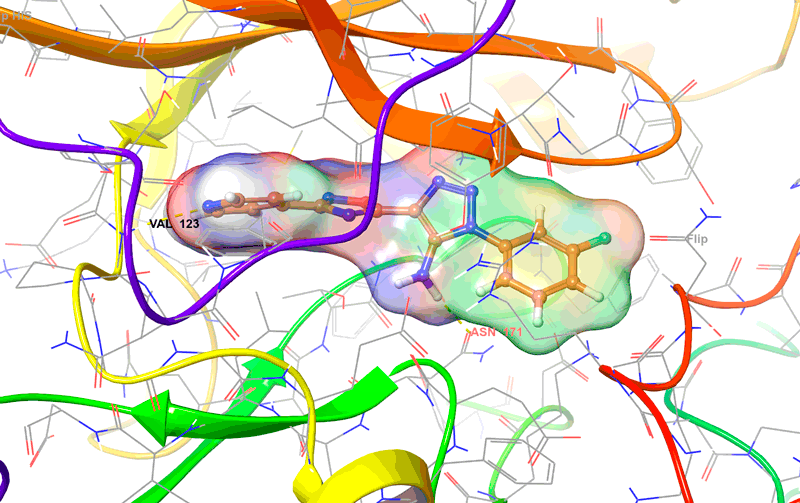