Aurora kinases (A, B, C) - members of serine/threonine kinase family, are key regulators of mitosis. Drugs that inhibit Aurora kinases are likely to exert anticancer effects in various fields, including the gynaecology. The primary role in cell division and duplication was observed for both kinase activity and expression level of Aurora A and Aurora B that are upregulated in most human solid tumors. Currently, over a dozen of Aurora kinase inhibitors, both Aurora subtype selective, Aurora B selective as well as pan-selective, have entered clinical trials. Despite the fact that all of these types of inhibitors have shown preclinical and clinical efficacy, so far no Aurora kinase inhibitor has been approved for clinical use. Particularly, dose-limiting toxicity (neutropenia) is a key issue that needs to be addressed. Preliminary evidence suggests that the use of selective Aurora A inhibitors could avoid Aurora B-mediated neutropenia in clinical settings.

In accordance to that hypothesis, we have developed the library of potentially selective inhibitors of Aurora A kinase from the Life Chemicals Stock Compound Collection. Our library has been designed as based on specific conformation of ATP binding site of Aurora A recorded in 2NP8 PDB entry [1]. The number of conformational changes in the protein active site induced with bindings of pyrimidine-based ligand have given an opportunity to design more specific ligands. Key amino acids involved in an inhibitor binding were identified by docking with Surflex-Dock tool. On the basis of protein-ligand interactions the query model of protein binding site was prepared with SYBYL-X Unity screening tool. The docking procedure was launched with Unity Flex-Search tool for the pre-filtered set of compounds from the Life Chemicals Stock Collection. The following residues were found to be important for hydrogen-bonding network: Ala213, Pro214, Glu211, Arg137, Gly142 and Lys143. The hydrophobic region of the active site of the protein was also included in docking constraints (Fig.1).

The total number of compounds in the library is over 590. 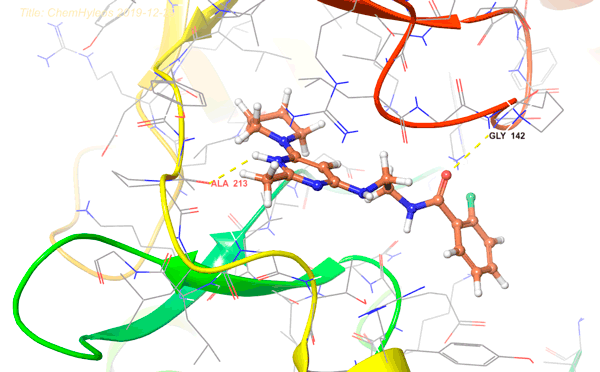 Fig.1. Example of binding conformation of the hit compound F5626-0031 from the Life Chemicals Aurora A kinase Library. The ligand forms two hydrogen bonds with Ala213 and one with Glu211 residue from the receptor binding.