PDK1 (3-phosphoinositide-dependent protein kinase-1) plays an important role in insulin and growth factor signaling cascades. It is known to phosphorylate and activate at least 24 protein kinases that belong to the AGC (cAMP-dependent, cGMP-dependent, protein kinase C) family of protein kinases. Many studies have focused on understanding the mechanism by which these AGC kinases are activated in cancer and the following insulin and growth factor stimulation. Numerous recent observations suggest that PDK1 inhibitors may provide novel opportunities for the development of effective classes of therapeutics. Of special significance is the fact that almost half of common human tumor types, including breast, lung, gastric, prostate, haematological and ovarian cancers possess mutations in genes that regulate PIP3 production, that, in consequence, causes overstimulation of PDK1 and activation of AGC kinases. The effects of PDK1 inhibitors on cancer cell growth in vitro and in vivo indicate that PDK1 is a valid drug target. Accumulated evidence demonstrates that PDK1 is a promising therapeutic target, inhibition of which may be useful to prevent cancer progression and abnormal tissue dissemination [1].

Most of the described inhibitors of PDK1 are ATP competitive and target the ATP-binding site of the kinase. We have analyzed ten PDB structures of PDK1 inhibitor complexes [2-4] and selected structure recorded in 1UU3 PDB entry for in silico search of potential inhibitors among the Life Chemicals Stock Compound Collection. A screening model of protein binding site was built based on the features of the residues responsible for the protein ligand interaction: Ala162, Ser160, Thr222, Val143, Glu166 (residues responsible for polar interactions); Leu159, Leu212, Thr222, Val143, Tyr170 (hydrophobic regions) (Fig.1). The Query Model of the binding site was prepared within UNITY Application (SYBYL-X) and included Donor, Acceptor and 2 Hydrophobic sites with surface volume constraint. Virtual screening of the prepared set of molecules were carried out with UNITY Flex Search Tool. The final set of hit compounds were selected by QFit scoring function.

The total number of compounds in the library is about 760. 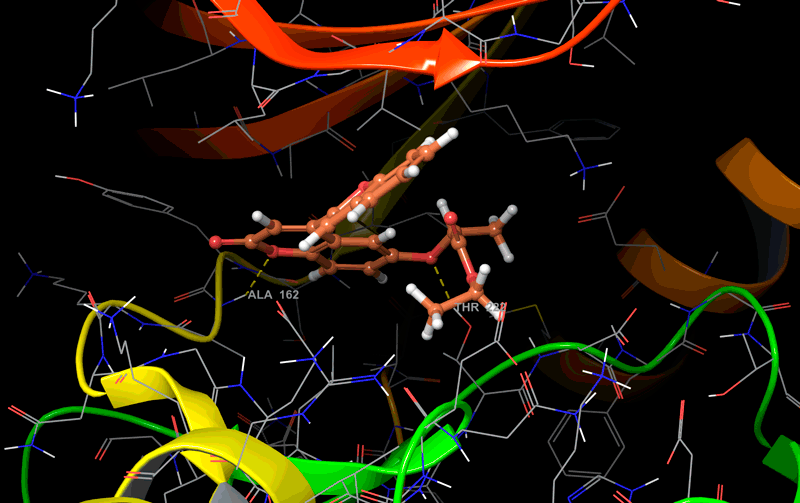 Fig. 1. Binding mode of compound F2655-0166 from the Life Chemicals PDK1 Kinase Focused Library in the active site of the kinase. The compound forms two hydrogen bonds with Ala162 and Thr222.